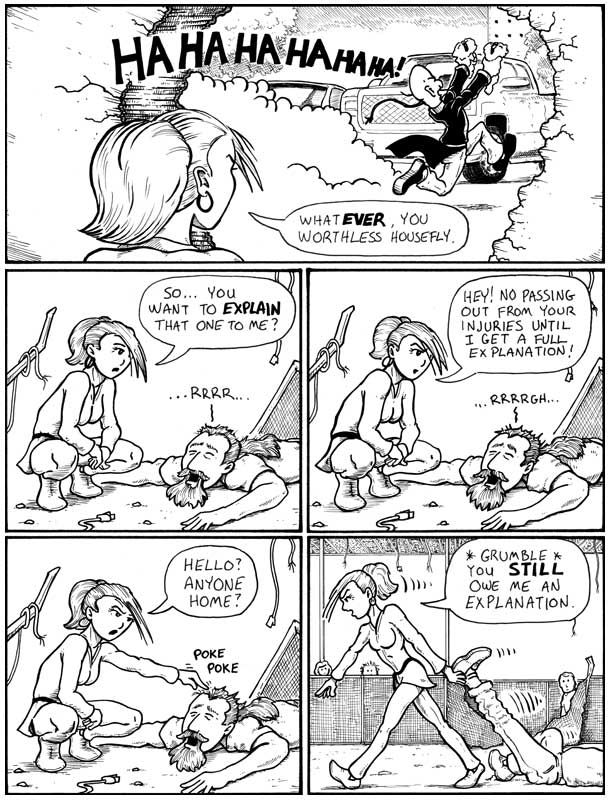 That’s a wrap for Chapter 2. To all those who said it couldn’t be done, IN YO FACE!!!  (Actually, no one said this but if they had they’d look mighty silly right now.)As mentioned a few weeks back, I will be taking a brief hiatus to finish Ch3. The next chapter is 2/3 finished and I’ve got 3/4 of the script for Chapter 4 completed so the gap will be brief but I’m afraid if I don’t take one now I’ll have to do it mid-chapter at some point. I’d like to avoid that if at all possible. Fear not readers (both of you) I will have some material to post in the meantime so updates to the site will not be interrupted.

Now would also be a fantastic time to take advantage of the Contact page shown above and connect with me through Twitter or Facebook to keep abreast of developments. I occasionally post bonus art and other stuff out there in addition to the site updates so what are you waiting for? Jump on in!

I plan to start hyping the site more now that two full chapters are there for people to see. I hope one day that readers will outnumber Ukrainian hackers in my site statistics.

Lastly, while I don’t generally like to explain my comics, the line this week about a “worthless housefly” could use a little context. Some years ago I was required to watch a training video at work on dealing with difficult customers. Since the video couldn’t include actual swearing and vulgarity they had the imaginary “difficult customer” use a variety of imaginary insults and “worthless housefly” was one of them. I couldn’t resist shoehorning that into the comic but it’s a bit of a non-sequitur. Anyway, enough babble, stay safe and I’ll be back with an update next week!