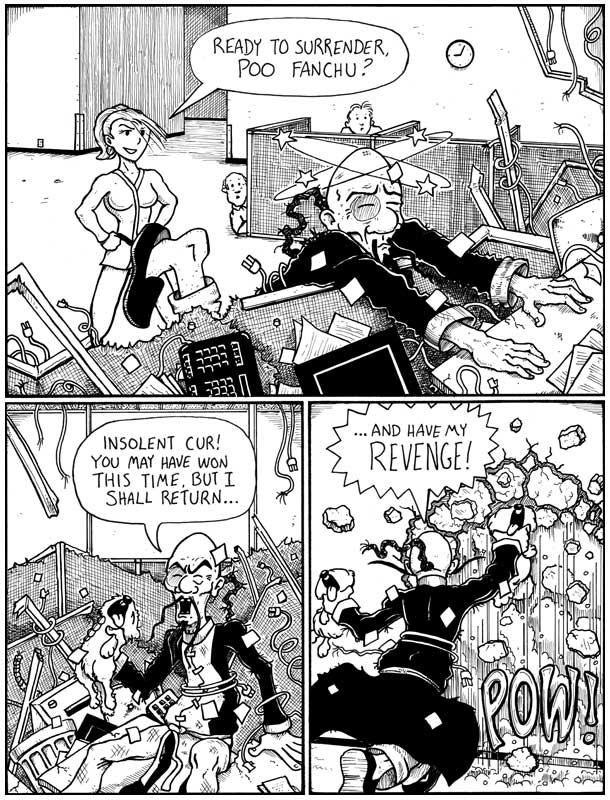 I’m very fond of this particular page. It came out pretty well, I think.

One more page and Chapter 2 is complete! I still plan to take a week or two off to get caught up on pages for Chapter 3 but the script for Chapter 4 is almost done so there won’t be a long hiatus.

Random stuff: News article over the weekend discussing a suit filed by Jack Daniels (actually their parent company) over an alleged trademark infringement by an independent outfit selling Popcorn Sutton Tennessee Moonshine. Popcorn Sutton was a real life bootlegger featured in a couple of documentaries, including this one, in which he claims to have given up the moonshine trade. Six years later he was busted with close to 900 gallons of illegal hooch. Sadly, he chose to end his life rather than face prison time.

The rightness or wrongness of his choices and the nature of law are sort of beside the point here though. His fame had spread enough that a company approached him to manufacture his “secret recipe” in a completely legal and aboveboard fashion. Now that the bottles are hitting the market, the legal parasites attached to Jack Daniels are suing not merely for a change in the label (a burden on any company) but also for the complete destruction of all product AND THE HANDING OVER OF ALL PROFITS MADE. I’m sure they’re aiming for a settlement of some sort but man that sticks in my craw as just some ridiculous hubris. As someone who might someday start trying to merchandise my work, the idea that a design that is too close to a corporate design would potentially require me to hand over EVERYTHING…well, it’s a sad day in America.