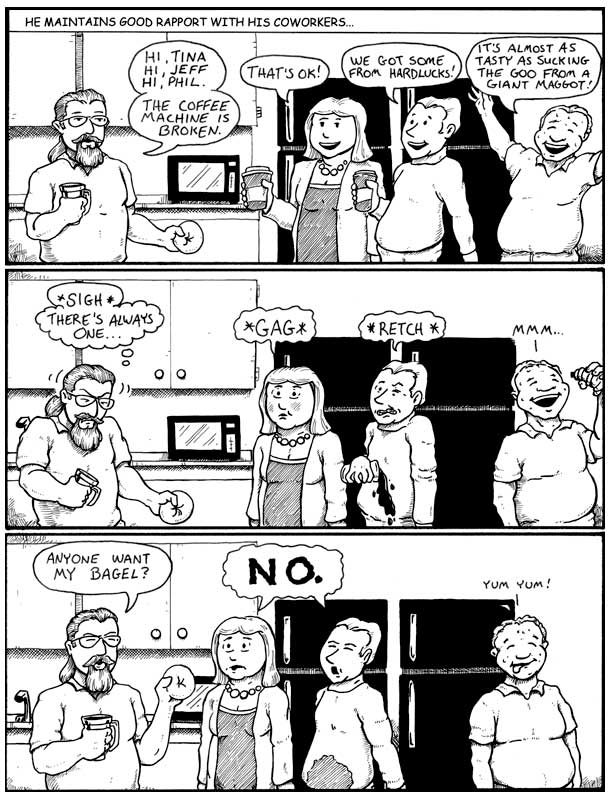 No Comments on Page 6

I really hope that’s a croissant Phil is eating in panel 2….

I made a couple of very minor changes to the site this week. The collection title in the Archives is now titled Episode One rather than Chapter One (cue the Star Wars jokes). I also made a change to how the site is described in the About section. It occurred to me that a reader might wonder why a series about Kung Fu Meghan has yet to show Meghan (she’ll get here Page 8) and so I tried to write a new summary that won’t give any plot details away but also explains the format I’m trying to work out. Using the title Chapter One seemed a little pretentious, as if I’m writing the next great graphic novel but it’s not just a gag-a-day comic strip either. If anyone reading has any thoughts on the subject I’d love to hear them, just drop me a line.

Anyway, that’s enough for now, I’ve caught another cold and feel horrible. I should probably go into detail though, that seems to be blogger gold. Or maybe I could tweet it! Yeah, that’s the ticket! Soon I’ll have as many followers as that one Kardshian (17.4 million according to a headline on Yahoo News today. WTF, people.)